The possibility of mental life itself depends on this conflict to such an extent that only blind illusion can insist on rights that may be shattered tomorrow. For autonomous works of art, however, such considerations, and the conception of art which underlies them, are themselves the spiritual catastrophe of which the committed keep warning.

Once the life of the mind renounces the duty and liberty of its own pure objectification, it has abdicated. Thereafter, works of art merely assimilate themselves sedulously to the brute existence against which they protest, in forms so ephemeral the very charge made viceversa by committed against autonomous works that from their first day they belong to the seminars in which they inevitably end. The menacing thrust of the antithesis is a reminder of how precarious the position of art is today.

Each of the two alternatives negates itself with the other.

Committed art, necessarily detached as art from reality, cancels the distance between the two. Between these two poles, the tension in which art has lived in every age till now, is dissolved. Contemporary literature itself suggests doubts as to the omnipotence of these alternatives. For it is not yet so completely subjugated to the course of the world as to constitute rival fronts. Even if politically motivated, commitment in itself remains politically polyvalent so long as it is not reduced to propaganda, whose pliancy mocks any commitment by the subject. If no word which enters a literary work ever wholly frees itself from its meanings in ordinary speech, so no literary work, not even the traditional novel, leaves these meanings unaltered, as they were outside it.

The special position that Sartre accords to literature must also be suspect to anyone who does not unconditionally subsume diverse aesthetic genres under a superior universal concept. The rudiments of external meanings are the irreducibly non-artistic elements in art. Its formal principle lies not in them, but in the dialectic of both moments—which accomplishes the transformation of meanings within it.

The latter oscillates untenably between the subjective intentions of the artist and the demands of an objectively explicit metaphysical meaning. In our country, this meaning generally turns out to be an uncommonly practicable Being. The social function of the talk about commitment has meanwhile become somewhat confused. Cultural conservatives who demand that a work of art should say something, join forces with their political opponents against atelic, hermetic works of art.

For the atheist Sartre, on the other hand, the conceptual import of art is the premise of commitment. Yet works banned in the East are sometimes demagogically denounced by local guardians of the authentic message because they apparently say what they in fact do not say. Today it flares up again just as it did forty years ago, at works of the same kind, including some whose origins now go a long way back and are unmistakably part of an established tradition.

Newspapers and magazines of the radical Right constantly stir up indignation against what is unnatural, over-intellectual, morbid and decadent: they know their readers. The insights of social psychology into the authoritarian personality confirm them. This hostility to anything alien or alienating can accommodate itself much more easily to literary realism of any provenance, even if it proclaims itself critical or socialist, than to works which swear allegiance to no political slogans, but whose mere guise is enough to disrupt the whole system of rigid coordinates that governs authoritarian personalities—to which the latter cling all the more fiercely, the less capable they are of spontaneous appreciation of anything not officially approved.

They were not even particularly vigorous, or they would have taken much crasser forms after 13 August. Thus, while it is impossible to provide a definition of art in the traditional sense, there remains the possibility of understanding the openness of art to its lack of fixed essence. Art establishes itself in the very process of liberating itself from established practices, from what had become aesthetic second nature. However, for reasons that will gradually become clearer, what remarkable works achieve is not merely a relative freedom from staid forms and conventions, as though the aim were merely to broaden the category of what counts as art.

How does this eloquent though unintentional hieroglyphic writing play itself out concretely? And how is it realized in literary works? On a general level, Benjamin, like Adorno after him, stresses the pointlessness of defining artistic production by way of induction or identifying marks, which can easily obscure what is peculiar to a given work or series of works. The point of criticism or of the philosophy of art is not to construct a unifying concept under which very different works can be classified, often rather awkwardly—e.

Nor is the point to compare works to some standard, according to which so-called minor works may be found wanting, whether the standard appealed to is, e. The German mourning play is expressive in this specific sense.

It says more than can be said at the level of dramatic content or authorial purpose. For Benjamin, this something resides within the melancholy of the seventeenth-century Lutheran worldview and its obsession with the transience of life, as these take shape in the literature of the period and, especially, as reflecting a deep belief in the impotence of human activity in the face of fate. This belief might be summarized, albeit somewhat reductively, as the ineffectuality of good works in the face of the final judgment of God. However, what was not immediately evident to the inhabitants of this world was the social construction of this belief.

The possibility of such knowledge is at best replaced by patient faith, for example, which may assuage but does not overcome discouragement and suffering; it papers over the futility of a life that might have been different.

Adorno, as well as Horkheimer, critiqued all forms of positivism as responsible for technocracy and disenchantment and sought to produce a theory that both rejected positivism and avoided reinstating traditional metaphysics. Existential Psychotherapy. Under the direction of Gilbert Ryle , Adorno worked on a dialectical critique of Husserl 's epistemology. Hullot-Kentor is also currently working on a new translation of Negative Dialectics. Despite the recent upsurge of interest in Theodor Adorno's work, his literary writings are generally under-represented. Jeffries, Stuart.

Likewise the Holy Spirit also helps, by causing us to pray with deep groanings, our infirmity …, our impotence, and inability. Faith promises to dissolve impotent hope into patient waiting; but since impotence and suffering persist, the latter serves merely to mask the former, which finds other ways of expressing itself. Such theological views thereby inevitably distort and seek to suppress the suffering that they nevertheless also express, turning the problem of earthly suffering into our subjection to an inscrutable divine plan.

It is the debilitating and disempowering notion that things cannot be otherwise that organizes these works; but this organization also suggests an unconscious resistance, an inkling that the denial of objective happiness or, in short, suffering as fate, is an object worthy of melancholic presentation.

However, crucially, it matters little whether knowledge of the social construction of this hopelessness was given as such in experience or not i. In fact, generally speaking, conscious awareness of this situation and any thought of overcoming the apparent futility of life was instead short-circuited by faith and simple moral principles.

In this way, the mourning plays are to be read as the expression of a surplus of meaning over the more familiar, readily communicable beliefs that circulate within the confines of the seventeenth-century Lutheran worldview. The belief that things cannot be otherwise as accompanied by faith and the obscure possibility of redemption is precisely the thought—however repressed and distorted—that they nevertheless ought to be otherwise.

Adorno takes this reading to provide a model of sorts for artistic and literary interpretation, first and foremost in his reference to the unintentional surplus of artworks, i. However, as we have seen, their importance cannot lie in their participation in some aesthetic canon. Conversely, even minor works can eloquently albeit unintentionally express a truth content that exceeds their manifest content. The overall point of the seminar was to analyze the meaning and possibility—or rather, impossibility—of real social progress under capitalism. 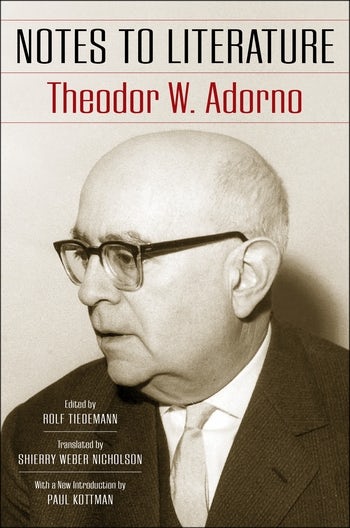 For Adorno, Huxley fails to recognize the profound ambiguity of progress and the social mechanisms that generate it. In the essay on Brave New World, the ambiguity of this insight is directed against Huxley, essentially because, while he well understands the dark side of progress, he remains blind to its utopian promise, i. This blindness takes a number of forms, according to Adorno, all connected by at least two highly questionable postulates: that there exists a natural opposition between the individual and society; and that technology follows a historical teleology that pits progress against human beings.

In both cases, Huxley doubts the potential for a real, universal, socially mediated happiness that does not trample on individual human dignity and cultural values. This, then, is a future in which the happiness of the individual is ruined by being entirely dissolved into a totalitarian whole and its reified, incontestable mechanisms of social conditioning. True, the criticisms leveled by Huxley against pseudo- happiness retain a trace of utopian content, insofar as they remind us—correctly—that happiness and conditioned social conformity are at odds with each other.

Thus, for Adorno, the negative portrayal of objective, i. Part of the problem is that Huxley thinks that the satisfaction of material needs dispenses with the struggles and suffering that give humanity its pluck and fiber. Or to frame the issue even more explicitly, Huxley perversely insists on the necessity of suffering for life to have meaning precisely when the elimination of socially unnecessary suffering had become technically possible. I want sin. Suffering is the index of his freedom. The question, of course, is whether Huxley can lay claim to such an opposition: the natural, suffering individual who, though flawed, is at least a genuine individual versus reified social forms that dissolve the individual into a false state of socially mediated happiness.

Through this opposition, Huxley takes a stand against the society that seeks to alleviate suffering, claiming that such a society would have to be based upon a totalitarian suppression of individuality. For him, as for the bourgeois philosophy of history but with dystopian intent, history moves in an unbroken, straight line.

What Huxley cannot imagine is that he remains trapped, once again like the melancholic inhabitants of the Lutheran world, within the postulates of his historical existence. But it is just this myth, which also produces the vision of the individual as powerless in the face of social destiny, to which Huxley tacitly subscribes in his view of progress as catastrophic fate. It was not published in the proceedings of the meeting, as would normally have been the case.

Adorno himself did not attend a formal discussion of his talk that had been planned to take place the next day, during which his reading was contested. For a summary of the event, see Savage 97—99; Betzen — ; Binder — Instead, he put himself above the fray.

Thus, beyond the historical references discernable in the work lies the more general idea that language itself—and the language of the poem in the first instance—might serve such remnants in a way that exceeds intentional content. The question, then, is what it might mean for language to unintentionally serve nature, or nature as remnant. It is here that the disagreement with Heidegger reveals its importance, for Heidegger too claims that we have overlooked or forgotten a certain surplus within being itself Sein —a surplus that was never mastered in the history of philosophy, with its one-sided emphasis on beings or its search for a supreme being Seiendes.

It names a tension between now and a better future that is unresolvable through any attempt to return to an original source of greatness. Language is thereby more than the mere communicative circulation of existing concepts, beliefs, and worldviews.